“Scarlet O’Hara was not beautiful, but men seldom realized it when caught by her charm as the Tarleton twins were. In her face were too sharply blended the delicate features of her mother, a Coast aristocrat of French descent, and the heavy ones of her florid Irish father.“

In that way author Margaret Mitchell described her Gone With the Wind (1936) main female character, Scarlet O’Hara. However, the casting of 25 year old British actress Vivien Leigh did not correlate to the novel opening description of Scarlet, quite on the contrary men were blown away by her classic beauty. 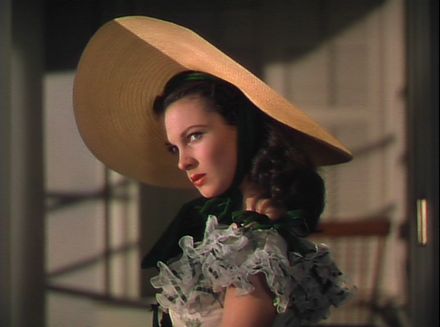 Filming proved to be very difficult. The actors and crew, and especially the main character Scarlet, had to be on set for very long hours, seven days a week. Vivien, who began to feel exhausted and clashed more frequently with her co-star Leslie Howard. She also missed her husband, actor Laurence Olivier, who at the time were filming in New York. She made several phone calls to him, expressing how much she hated filming. After talking to Olivier in frequent late night calls she managed to pull through the shooting schedule, but among many of the crew and co-actors she had received a diva status, a person who complains to get her wishes granted, a very uncooperative and selfish actress. What her fellow crewmembers were not aware of, was that Vivien was diagnosed as a manic depressive person, or as it is called today – Bipolar.

When Vivien married Laurence Olivier in 1936, she was already a star while he was a mega-star. To match his performance and reputation on the stage, she put herself under immense psychological train. The couple had starred in several films together playing the lead characters, like in That Hamilton Woman (1941). Even if they had almost the same amount of screen time, Vivien always felt like she could have done better.

Having an extremely busy schedule, suffering from unrealistic pressure on herself, she suffered two miscarriages and in 1945 contracted a severe case of tuberculosis. After taking a year off from all duties she returned to the stage, but she would always be vulnerable for new infections.

As if this was not enough, her mental health began to deteriorate. Her mood swings became more severe, moving between depression and dangerous mania. In 1951, she won her second Best Actress Oscar (the first was for Gone with the Wind) for A Streetcar Named Desire. Her film character, Blanche Dubois, was manic and mad, and Vivien sensed that she and Blanche were one and the same.

About that time, Vivien also developed chronic insomnia. Her mental health got worse and in 1953 when on a flight to Los Angeles, she began to hallucinate and tried to get off the plane in mid air. She was immediately flown back to London, where she was placed in a psychiatric hospital where she had to endure electric shock-therapy. Her husband, Laurence Olivier, was at her side as much as his schedule would allow, but finally in 1960 her condition became too much and he left her after 20 years of marriage.

Vivien soon after the divorce from Olivier began a new relationship with actor Johan Merrivale who adored her. She continued to star in films and performing on stage, but in 1967, while rehearsing the play A Delicate Balance, her tuberculosis returned. She was at the time just 53 years old and had to take several weeks off to recover. In early July it seemed like she had recovered and on the night of 7 July, Merrivale left her to perform in a play that night. When he returned about midnight, Vivien was asleep. When he returned 30 minutes later, he found her dead on the floor. She had tried to walk to the bathroom while her lungs were filling up with fluid from the tuberculosis and she collapsed and suffocated. 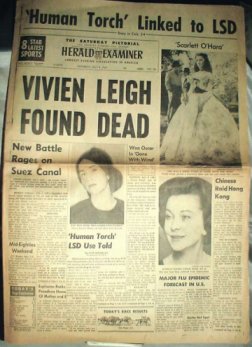 The end for Vivien Leigh, one of the most beautiful and talented screen and stage actresses, was very tragic. Her death did not at the time put any light at mental illness, but her ex husband, Laurence Olivier, were addressing the subject in his 1982 memoirs. And by writing this short article, maybe Vivien Leigh can put some further light on the subject.

“I cannot let well enough alone. I get restless. I have to be doing different things. I am very impatient person and headstrong. If I’ve made up my mind to do something, I can’t be persuaded out of it.” (Vivien Leigh)

“Throughout her possession by that uncannily evil monster, manic depression, with its deadly ever-tightening spirals, she retained her own individual canniness – an ability to disguise her true mental condition from almost all except me, for whom she could hardly be expected to take the trouble.” (Laurence Olivier)