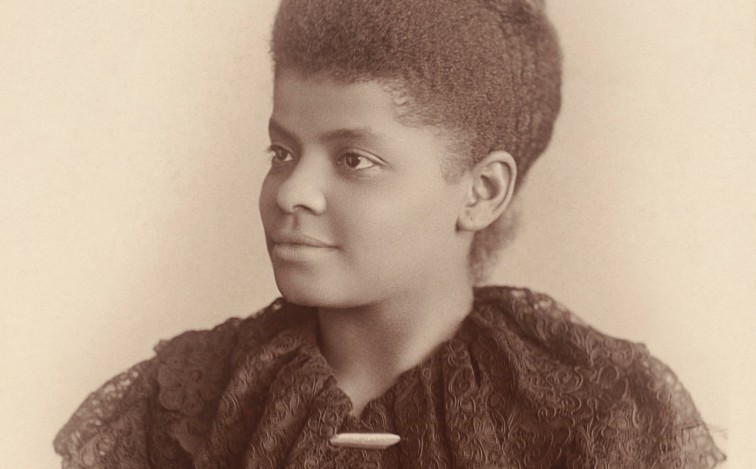 Ida Bell Wells, born into slavery on 16 July 1862 in Holly Springs, Mississippi, is known for her relentless work in promoting women’s rights and for advocating equal rights. For example, she documented lynching in the United States in the early 1890’s and was a co-founder of the National Association for the Advancement of Colored People (NAACP). However, yet the story of her interesting life and doings has not reached the broad masses.

In 1878 the then 16 year old Ida Went to visit her grandmother in Mississippi Valley. After spending some time with her grandmother she received word from home that both her parents and her 10 moths old brother had died in yellow fever. After the funeral, friends and relatives decided that the remaining children, Ida and five siblings, would be split up and be sent to different foster homes. Ida, being the oldest, refused letting this happen, and to keep the family together she applied for and got the job as a teacher in a black elementary school. Ida lied about her age, saying she was 18 years old, to get the job, but apparently she did a very good job despite her young age. Her grandmother,Peggy Wells, helped taking care of the younger siblings while Ida was working, earning $30 a month. It was during this time she became fully aware of injustices and discrimination. White teachers were earning $80 a month, and this discrimination made her resent the segregated school system as well as showing greater interest in the American race politics.

In 1883 Ida moved to Memphis, Tennessee, continuing to teach, but now with a higher salary than in Mississippi. She also attended some summer Courses at Fisk University in Nashville. During this time she provoked a lot of people because of her strong political views on women’s rights.

On 4 May 1884, Ida was travelling by train from Memphis to Nashville. She had bought a first class ticket and entered the train. When the train conductor came along to check the tickets, he ordered her to give up her seat for a White man and go sit in the smoking or “Jim Crow” (for blacks) car. Ida insisted that she had purchased a first class ticket and had the right to sit where she sat. In her own Words:

“I refused, saying that the forward car was a smoker, and as I was in the ladies’ car I proposed to stay. The conductor tried to drag me out of the seat, but the moment he caught hold of my arm I fastened my teeth in the back of his hand. I had braced my feet against the seat in front and was holding to the back, and as he already had been badly bitten he didn’t try it again by himself. He Went forward and got the baggageman and another man to help him and of course they succeeded in dragging me out.”

The other passengers, all white, applauded when Ida was carried off the train, but she took the case to court. She hired an African American lawyer to sue the train company, she wrote a newspaper article about how she had been treated in The Living Way and now she got a lot of publicity. The railway company, however,  paid off her lawyer, whereby she hired a white attorney. On 24 December 1884 Ida won the case and was awarded $500. The railway company appealed to the Tennessee Supreme Court who reversed the ruling in 1887.

The law suit sparked Ida’s career as a journalist, and in 1889 she gave up teaching to become a partner in the Free Speech and Headlight newspaper. During this time, racial issues escalated in Memphis, and in 1892 three of Ida’s friends were lynched. They had opened a small shop that took customers away from a competing white business, resulting in a White mob attacking her friends shop. They fought back, and one of the attackers got killed. The three black men were put in jail, but when awaiting trial, a white mob broke into jail, dragging the three men away from town and brutally murdered them. Ida wrote in an article that:

“The city of Memphis has demonstrated that neither character nor standing avails the Negro if he dares to protect himself against the white man or become his rival. […] There is therefore only one thing left to do; save our money and leave a town which will neither protect our lives and property …”

The article, and the lynching of Ida’s friends, resulted in 6,000 blacks leaving Memphis. Ida herself travelled the North to give speeches about the situation in the South. She also received a lot of death threats for pursuing her anti-lynching campaign, and because of these threats she decided to leave Memphis and settle in Chicago.

In 1893 and 1894, Ida travelled to Britain  to give speeches about the lynchings in the South and about racial equality. During her speeches to the British audiences, she showed photos of a white mob posing close to the body of a hanged black man. Her visits to Europe resulted in the forming of a number of European anti-lynching groups. This is an excerpt from Ida’s speech:

“As the body hung to the telephone pole, blood streaming down from the knife wounds in his neck, his hips and lower part of his legs also slashed with knives, the crowd hurled expletives at him, swung the body so that it was dashed against the pole, and, so far from the ghastly sight proving trying to the nerves, the crowd looked on with complaisance, if not with real pleasure….”

In 1895, Ida married her lawyer, Ferdinand Barnett, and together they got four children. Ida continued to travel for a while, but after the second child was born she had to retire from the public for a while as it was becoming harder to combine work with family life.

In 1930, after an unsuccessful bid for the US Senate, her health began to fail. She began writing her autobiography, Crusade for Justice in 1928, but it was never finished as Ida B Wells died of kidney failure in her home in Chicago on 25 March 1931.