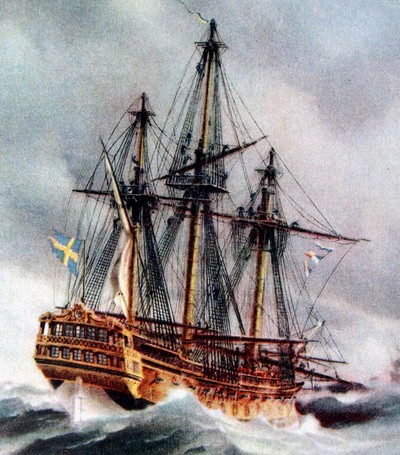 Claes Samuel Annerstedt was born at Tuna manor on 23 March 1799, and is a distant relative of mine. He lived a very interesting Life, and therefore he deserves to be mentioned at this webpage.

At an early age Claes Samuel went to sea, and at the age of 14 in 1813 he served as a cadet onboard the Swedish 74-gun ship of the line, Gustaf den Store (the ship was formerly known as Konung Gustav IV Adolf, see painting above), during an expedition in the Baltic Sea. The following year he served in the same capacity onboard the 70-gun ship of the line Konung Adolf Fredrik and later the same year onboard the frigate Galathé.

In early 1815, 16 years old and still a cadet, Claes Samuel accompanied the Galathé on a expedition to the Meditteranean Sea, where the Swedish ship was ordered to protect Swedish merchant ships from being captured by pirates from the so called Barbary States in North Africa. The expedition left Karslkrona on 15 May 1815 and returned back home on 23 July 1816. There had not been any threats from pirates, but the journey had been rough, mainly because of severe weather. After the return to Sweden, the 17 year old Claes Samuel was promoted to Second Lieutenant.

After serving on board a series of smaller vessels, for example the brig Vänta Litet ( in English Wait a Minute) in the Baltic Sea, he was promoted Lieutenant in 1822 and given the command of the steamship Svenska Lejonet (Swedish Lion). In 1824 he was promoted to First Lieutenant and the following year he was awarded a scholarship to serve in the British Royal Navy.

Early in 1825, Annerstedt reported for duty on board the HMS Aurora, which first was bound for Lissbon and later on for the Caribbean. The HMS Aurora was a frigate of 40 guns and relatively newly built. Originally she was built in France in 1808 and named Clorinde, but on 26 February 1814, during the Napoleonic War, she encountered the British frigate HMS Eurotas. After a violent battle, the Clorinde struck her colours and surrendered, entering service in the Royal Navy after going through repairs at Portsmouth. In the painting below, we can see the Clorinde to the left, battling HMS Eurotas. 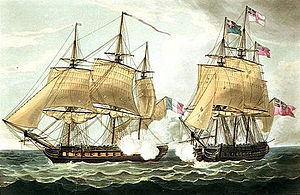 At the end of 1825, Annerstedt transfered to the Royal Navy 50 gun frigate HMS Isis, and accomanied her on her voyage to the Caribbean. The drawing below is showing the HMS Isis.

After returning to Sweden, Annerstedt held various commands within the Swedish Navy, and in 1837 he was promoted to Captain, and in 1839 he received the Order of the Sword.

In 1844 he was made Commander, and in 1846 he commanded the frigate Desirée during an expedition in the Baltic Sea, visiting St Petersburg. At that time, Annerstedt received the Russian Imperial St Stanislaus order. After spending most of his life to sea, he was appointed Rear Admiral in 1857, and in 1858 he took up the role as military representative at his Majesty’s High Court.

In 1835, Claes Samuel married the 32 year old Louise Lagerstråle, who was the daughter of Claes Samuel’s commanding officer, Admiral Gustaf Lagertråle. It looks like this might have been a “political” marriage, but Louise and Claes Samuel had three children together, two sons and one daughter. After Claes Samuel retired in 1866, he and Louise moved to live at a more rural place outside the city of Strängnäs. On 22 December 1869, Claes Samuel died, 70 years old. His widow, Louise, lived on until 13 March 1891 when she died at the age of 88.